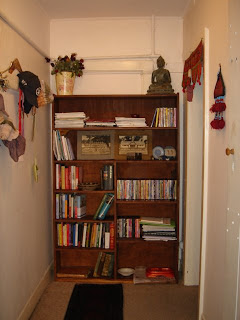 I have to confess...despite my disclaimer in the blog post, there are some things that are sacred to me...Gman thinks its my obsessive compulsive disorder, but Im pretty "religious" about my books or classification of. So when you enter my house the first thing that greets you are books and other objects that are sacred to me...an encyclopaedia that was a hand me down from an aunt (which is a time capsule of its own as I wonder of what was "true" circa 1950s and still made some sense in the 80s) and other inheritances over the years, Pesho's food dish, the "nazars" I collect, a witch (goddesses are soooo over rated), the Buddha that caused a run in with the customs for Gman in Indonesia...all my Heralds, Newslines, Friday Times that are my "letters from home".

The "real" books are in the living room...and the "jazbatee" novels in the spare room. Hell hath no fury as an aneela scorned when an over efficient Gman slots them in the wrong spaces.
Posted by Aneela Z at 3:10 PM

Your call is important to us. Please remain on the line while a customer care rep gets back to you.

keeping a (cat's)eye on you